Cervical incompetence or cervical insufficiency is one of the causes of preterm birth, leading to increased perinatal morbidity and mortality. Late miscarriages and extreme premature birth are very traumatic for a couple physically and psychologically and It may lead to them delaying or even deciding against a future pregnancy.

What is Cervical incompetence or insufficiency ?

Cervical insufficiency is defined as “a painless dilatation of the cervix resulting in bulging or ruptured membranes and mid trimester miscarriage”. It occurs in 0.5% to 1.0% of allpregnancies and in up to 8% of women with repeated second-trimester miscarriages. 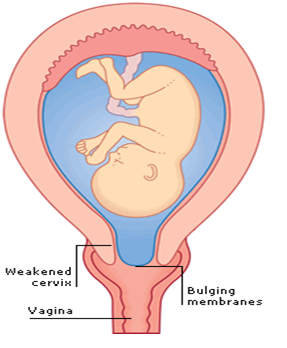 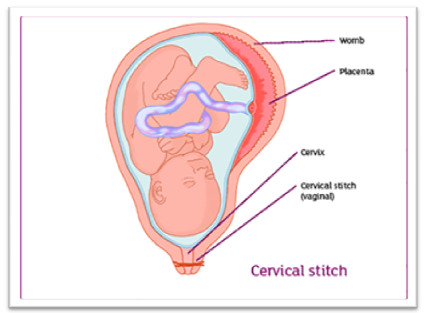 Both laparoscopic and robotic approaches to this procedure have been developed, allowing patients to enjoy a more rapid recovery as well as to avoid an unnecessary laparotomy. The observational studies reporting outcomes for laparoscopic-abdominal cerclage quote fetal survival rates in the range of 81% to 100%.

1. Short or no intravaginal portion of the cervix due to previous surgery like LEEP , LETZ and trachelectomy
2. Congenital malformation of uterus
3. Severe cervical lacerations during previous delivery
4. Previous failed vaginal cerclage

Advances in the field of minimally invasive surgery resulted in development of a new approach to cervical cerclage placement. Laparoscopic cerclage offers the benefit of placing the cerclage at a higher level which reduces the chances of pretem delivery with added benefits of reduced blood loss, reduced postoperative pain, and fewer adhesions, as well as decreased length of hospital stay and overall faster recovery time.

Laparoscopic cerclage can be placed either before conception (preconceptional or interval cerclage) or in early pregnancy (postconceptional). 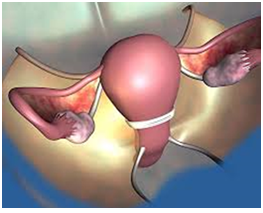 Performing abdominal cerclage preconceptionally mitigates the concerns of difficult exposure due to an enlarged pregnant uterus, increased risk of bleeding, and possible risks to the pregnancy . Furthermore, it can be performed via laparoscopy, which is associated with a short hospital stay, lesspostoperative pain, and rapid recovery.

Laparoscopic cerclage front and back view

Yet preconceptionalabdominal cerclage had not been popular because of the possibility of a subsequent miscarriage or fetal loss in thepresence of the cerclage. This concern seems unwarranted.

One can still perfom dilation and curettage in the presence
of abdominal cerclage without compromising its integrity
. In the event of failed pregnancy in the secondtrimester, the cerclage can be removed laparoscopically.
This will be followed by spontaneous expulsion of the fetus within a few days .

Postconceptional abdominal cerclage is required in pregnant women who for some reason cannot undergo vaginal cerclage. There is no differencein the rate of third-trimester delivery after abdominal cervical cerclage before or during pregnancy. 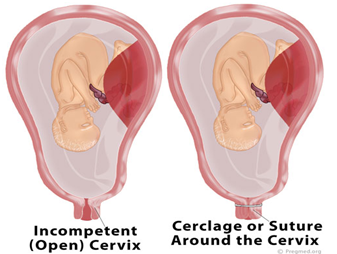 Patients undergoing laparoscopic cerclage should be delivered by cesarean section and stich can be left in place for future pregnancies.